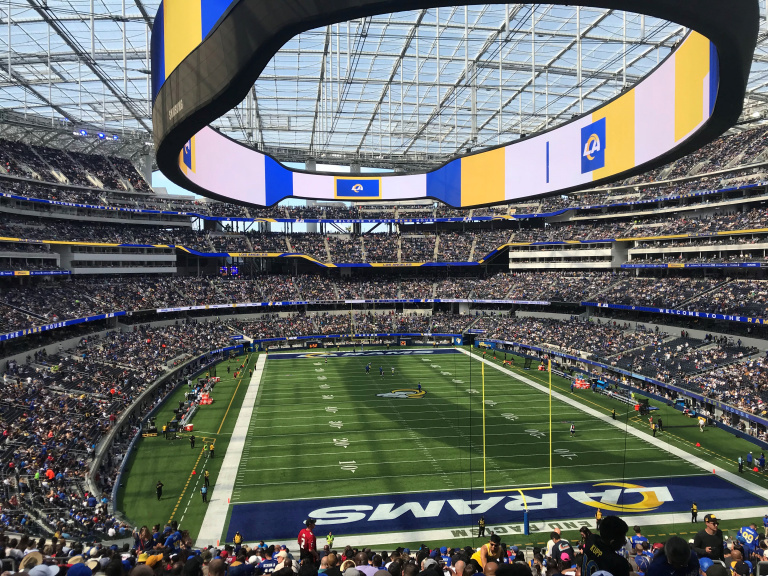 The year is coming to an end, which means the holidays are here — and for sports fans, it also means the NFL and college football playoffs are around the corner.

Football stadiums will turn into mini-cities holding tens of thousands of people, all of whom want to be hyperconnected as they cheer on their favorite teams. Through their mobile devices, they can share photos and video with their friends but also check on other scores, watch highlights and more, creating an integrated physical and digital experience.

SoFi stadium (pictured), a 70,000-seat sports and entertainment arena in Inglewood near Los Angeles, hosted the 2022 Super Bowl, for which the Wi-Fi usage hit an all-time high. Even the teams have their own Wi-Fi networks on each side of the field on dedicated channels for use during the game. In those 10 years, Wi-Fi has delivered a 100-fold increase in carried traffic, skyrocketing from 300 gigabytes in 2012 to 31.2 terabytes in 2022.

A major factor contributing to the traffic increase is social media, according to Chuck Lukaszewski, vice president and wireless chief technology officer for Aruba, a Hewlett Packard Enterprise Co. company. In addition to social media uploads of photos and videos on platforms such as Facebook, Instagram and Snapchat, cloud services such as iCloud also grew massively during that time period.

The other contributing factor is spectrum. For more than two decades, unlicensed spectrum for Wi-Fi connectivity has been available only in the 2.4-gigahertz and 5 GHz bands. In fact, it wasn’t until 2016 that 2.4 GHz and 5 GHz bands became fully accessible. With growing connectivity demands putting a strain on existing Wi-Fi networks, opening up the 6 GHz band for Wi-Fi 6E couldn’t have come fast enough. It extends the efficiency features and capabilities of W-Fi 6, providing up to seven 160-megahertz channels for high-bandwidth applications.

“At first, Apple didn’t support 5 GHz and some of the early Android devices didn’t support 5 GHz. Later, we had other issues to deal with, so we had half of the available spectrum,” said Lukaszewski, explaining the challenges of providing connectivity to fans in stadiums.

Realistically, the 6 GHz band isn’t likely to come online before the 2024 Super Bowl. The initial use cases will be indoors, since 6 GHz band is not approved yet for outdoor operations. Lukaszewski envisions Wi-Fi 6E access points also making an appearance at the 2025 game. In the meantime, Wi-Fi technology continues to improve. Over the 10-year period, the peak speed doubled thanks to adoption of “proximate” RF designs, which “solved the engineering side of the problem,” according to Lukaszewski.

Aruba supplied its technology for two games at Levi’s Stadium in Santa Clara in 2016 and Mercedes-Benz Stadium in Atlanta in 2019, where it collected real-time Wi-Fi data that showed hour-by-hour comparisons of the networks for the first time. By increasing the density by 30%, Aruba more than doubled the load that the networks could handle.

“Nobody has ever published a chart like that for any stadium, anywhere in the world,” said Lukaszewski. “We’re in a unique position to be able to do that because we have two different years and it’s a similar design at different densities.”

Aruba also collected data on concurrent Wi–Fi users. Stadiums were able to handle a lot more Wi-Fi users at once when Verizon Communications Inc. adopted Passpoint, a technology that allows mobile devices to automatically connect to a Wi-Fi network using their cellular SIM credentials. The cellular network is designed much like the cable network, where approximately 80% of the airtime is reserved for the downlink and 20% for uplink. During major games such as the Super Bowl, the upload traffic is three to four times greater than the download traffic. Passpoint is able to offload a staggering amount of traffic from the cellular network, where non-voice traffic is shifted over to Wi–Fi.

The main takeaway from Aruba’s data is that Wi–Fi is very stable at high loads compared with cellular networks. Lukaszewski called Wi-Fi “the heavyweight champion of the two technologies,” which carries a massive continuous load on all the radios, both licensed and unlicensed. Now with more spectrum coming online, stadiums and partners will also have the opportunity to roll out new fan apps like sports betting.

“The future is very bright,” he said. “The sheer size of the 6 GHz band means that we can increase the bandwidth that’s available to each user and keep up with new apps. So, the fan experience will become a lot richer.”

For Bryant–Denny Stadium, a massive arena located on University of Alabama’s campus in Tuscaloosa, Wi-Fi 6E is an important technology that will help address many existing connectivity problems. The stadium is home to the Alabama Crimson Tide football team. However, it houses 10 other venues dedicated to various sports, as well as practice facilities and an upcoming golf course.

The football stadium itself doesn’t provide the fan–facing services often seen in venues such as SoFi, with huge deployments of Wi–Fi. Bryant–Denny Stadium has one of the largest Distributed Antenna System or DAS implementations. The $10 million DAS installation has been refreshed every couple of years, improving wireless coverage, capacity and data speeds at the stadium.

The suites located within the stadium have internet protocol–based tablets and television displays, which offers fans a unique experience from an audiovisual standpoint, said Rand Harris, associate athletics director of information technology at the University of Alabama. Additionally, the technology enables the recruiting department to go out and find new talent. The university just installed the world’s longest IP-based tunnel video wall for recruiting purposes.

One of the challenges for deploying Wi-Fi throughout the stadium has been the concrete structure of the venue, originating back to 1929. On game day, Bryant–Denny Stadium could easily draw a crowd of 200,000 fans, with many tailgating outside the arena on the quad. There is an opportunity to get Wi-Fi to those tailgating areas, which would be triple what the stadium currently offers during a game, according to Harris.

The stadium started building the core of its future outdoor Wi-Fi 6E network during the last renovation when Aruba was selected as the sole vendor for both the wired and wireless network. The university chose the Aruba CX portfolio that uses a single-switch operating system from edge access to the data center. It includes management tools, smart automation and distributed analytics. There will be about 5,000 access points installed in all the athletics venues when upgrades are completed.

“Moving into CX is a comfort change,” Harris said. “We have to trust that software and pushing code is going to work the way it’s supposed to. Even the network engineers we’re hiring are a little different than they were before. But it has enabled us to start integrating equipment we’ve never thought about integrating into the network.”

The university has worked alongside Aruba to implement precision time protocol into its stack, a process that took more than a year. In doing so, the stadium upgraded its TV broadcast ability by rolling out Sony’s new suite of IP-based cameras on the Aruba CX platform, which, according to Harris, was not only an industry first but is also easy to grow with. When the university builds a new competition arena next year, the platform will scale to create a futuristic place for fans to experience the game in the digital world.

Once Wi-Fi 6E is fully deployed throughout the stadium, it will replace DAS. The university is working with AT&T and Verizon on offloading visitors to the Wi–Fi network. Wi-Fi 6E will also enable more advanced analytics. Today, the university mostly collects data on social media usage, but that’s expected to change with Wi-Fi 6E.

“Previously, the driver was just fan experience,” Harris said. “But at the end of the day, without the core network, everything is useless. We had to step back and focus on operational efficiency. From an operational standpoint, our biggest driver is having analytics and collecting data in the stadium that can be used to solve issues and bring new features to our fan base.”

Of course, Harris believes the fan experience is still just as important. The university wants to improve amenities such as its Crimson Rewards loyalty program in the stadium. The app is localized at the moment, so Wi-Fi is needed to enable new features such as gamification. Harris sees these enhancements, as well as many others, coming soon.