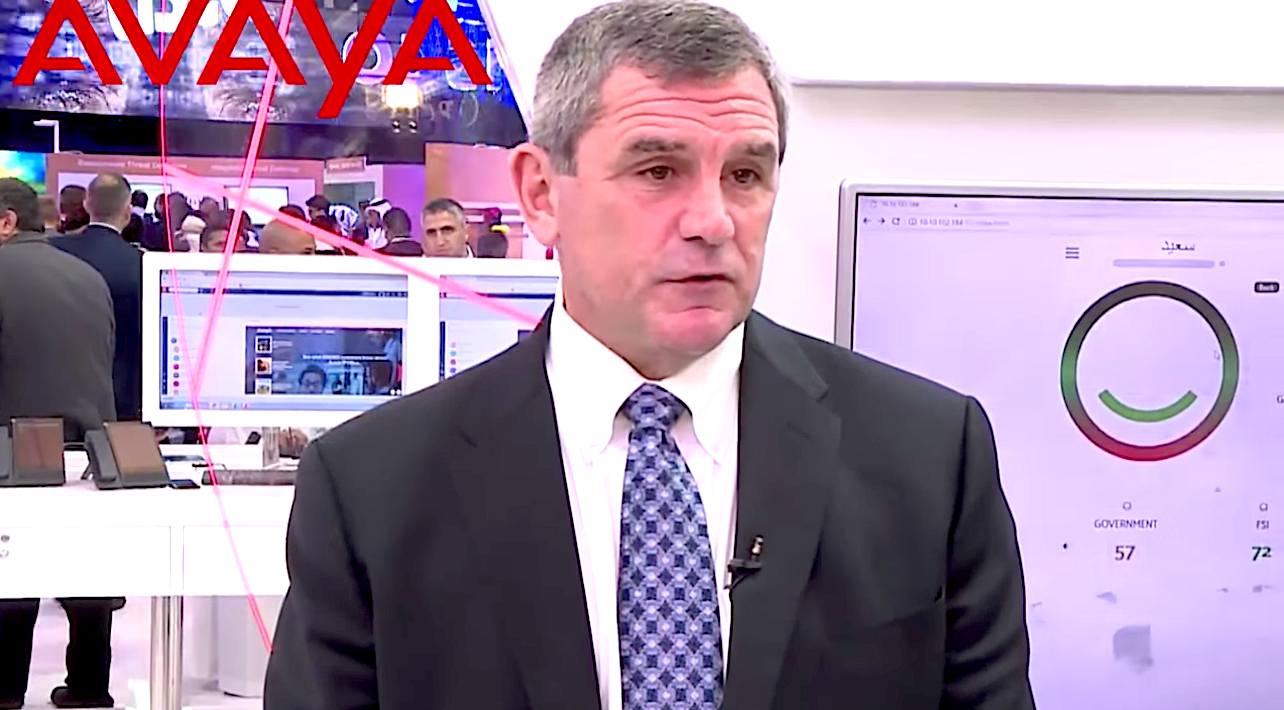 Revenue fell 2% from a year ago, to $716 million, missing a consensus estimate by $21.6 million. Profit before certain costs was $51 million, or 53 cents a share, with a net loss of $1 million or two cents a share.

All in all, the quarter represents a hiccup from the consistent growth numbers Avaya had been putting up. That sent shares down more than 8% today after the early-morning report.

On the surface, these numbers might give investors or even customers cause to be concerned, but when one looks behind the numbers, one will see the cause of the light revenue to be a mix of macro and revenue recognition issues related to the company’s transition. This morning, I had an opportunity to talk with Avaya CEO Jim Chirico (pictured) who walked me through the numbers.

Avaya is a global company and has customers in almost every country in the world. The conflict in the Ukraine accounted for a small amount of revenue this quarter but will have a bigger impact in the back half of this year, which led to reduced guidance. This isn’t just Russia and the Ukraine; other Eastern European country governments have allocated budget away from Avaya products to things like defense spending.

To understand the rest of the revenue miss, it’s important to look at many of the data points from the quarter. This includes:

Chirico reiterated Avaya has been focused on transitioning the company from a legacy-, hardware- and maintenance-centric business to a software, subscription and cloud company, and that’s akin to changing the wings on a plane as it’s flying. It’s even harder to do as a publicly traded company since the focus is often on revenue versus transformation. It’s important that, despite the stock dropping, Avaya stay focused on the long-term goal of transitioning the business and that’s happened faster that management had initially expected.

This acceleration of the cloud and subscription business, while good long-term, does have a negative short-term impact on revenue. If the transition had slowed down, Avaya would have had more onetime revenue, which would have helped Avaya make its second-quarter number but slows down the shift to cloud.

Also, Avaya has taken much of its global enterprise and government business direct and this also has a short-term financial impact. Without getting into the nuances of ASC-606, by taking the business direct instead of going through partners, Avaya can account for a lower (only 20% versus 60%) amount of point-in-time revenue than it did in the past. Chirico was clear that, in his words, “this is the right thing to do so we have more control of the customer, which is important as they move to the cloud.”

Wrapping up my call, Chirico summed up his feelings by saying, “There is a bit of sticker shock when you look at the revenue, but we aren’t losing bookings. The money is just recognized over the life of the contract. Moving to a recurring revenue model is exactly what we are trying to do, and we are doing to it at a fast pace. A year ago, 37% of our bookings were cloud and last quarter it was close to 75%. This quarter was consistent with our strategy and we are ahead of where we thought we would be right now.”

The most interesting news out of the quarter was that Avaya has expanded its global partnership with Microsoft. Building on its current relationship where the public (multitenant) version of Avaya OneCloud contact center as a service or CCaaS, customers can now run OneCloud in private or hybrid mode. Also, in addition to contact center, its unified communications product, Spaces will run in Azure.

This is a key initiative for Avaya because it’s well-suited to its customer base. Although the hype in cloud communications has revolved around public software-as-a-service offerings, large enterprises do not buy this way. Almost every global company I have interviewed that has looked at a traditional unified communications-as-a-service and CCaaS offerings have reverted to a private or hybrid cloud because it offers better control, customization and is easier to meet the demands of regulatory or regional compliance mandates. This is punctuated with contact center, where the data stored in those systems could be viewed as the crown jewels of the company.

This is why all the hyperscalers and large application vendors also offer private and hybrid versions of their solutions. Communications, because of its importance as a customer facing application, has tended to lag other area of information technology, but it is trending in that direction and will take on a similar deployment model for large enterprises.

Evidence of Avaya’s strength is borne out by the number of large deals the company did in the quarter. During the quarter, the company had 97 deals over $1 million total contract value, 18 over $5 million, eight over $10 million and two over $25 million. Most of the SaaS pure plays would consider $1 million total contract value to be a huge deal, but this is Avaya’s bread and butter. It’s also worth noting that the sales motion for these customers is substantially more difficult because it generally involves customization, professional services, application integration and other issues not found down-market.

The expansion of the Microsoft Corp. relationship creates more options for its large customers as OneCloud can be deployed in any version of public, private and hybrid clouds. The global scale of Microsoft Azure is aligned with Avaya’s global customer base, ensuring customers can keep data and workloads in the regions in which they do business.

Also, Avaya announced OneCloud would now be available in the Azure Marketplace. While the cloud alignment will likely get most of the headlines, from a business perspective, the Marketplace will have a bigger impact because OneCloud sales count toward customers’ Microsoft Azure Commit to Consume spend commitments. Running in Azure certainly has its benefits, but being in the marketplace is much more difficult and can have a significant positive impact.

Another partnership announced this quarter was a strategic relationship with Alcatel Lucent Enterprise, where ALE will resell Avaya’s public CCaaS offering, and Avaya will resell ALE’s network products. ALE has a large unified communications installed base and lacks contact center, so this fills a hole for it. Internationally, Avaya is often asked to provide a “full-stack” solution, which includes the network, giving this relationship strong potential.

Although Avaya’s numbers came in light this quarter, they don’t tell the whole story. A skeptic would say that Avaya has been talking the transition story for years, but years is what it takes. Government agencies, global banks, insurance companies and other massive companies have long depreciation cycles, so Avaya’s opportunity to transition the core of its business will track along those lines.

If one looks beyond this quarter’s numbers, one will see the business trending in the right direction and that’s more important than any one specific quarter.